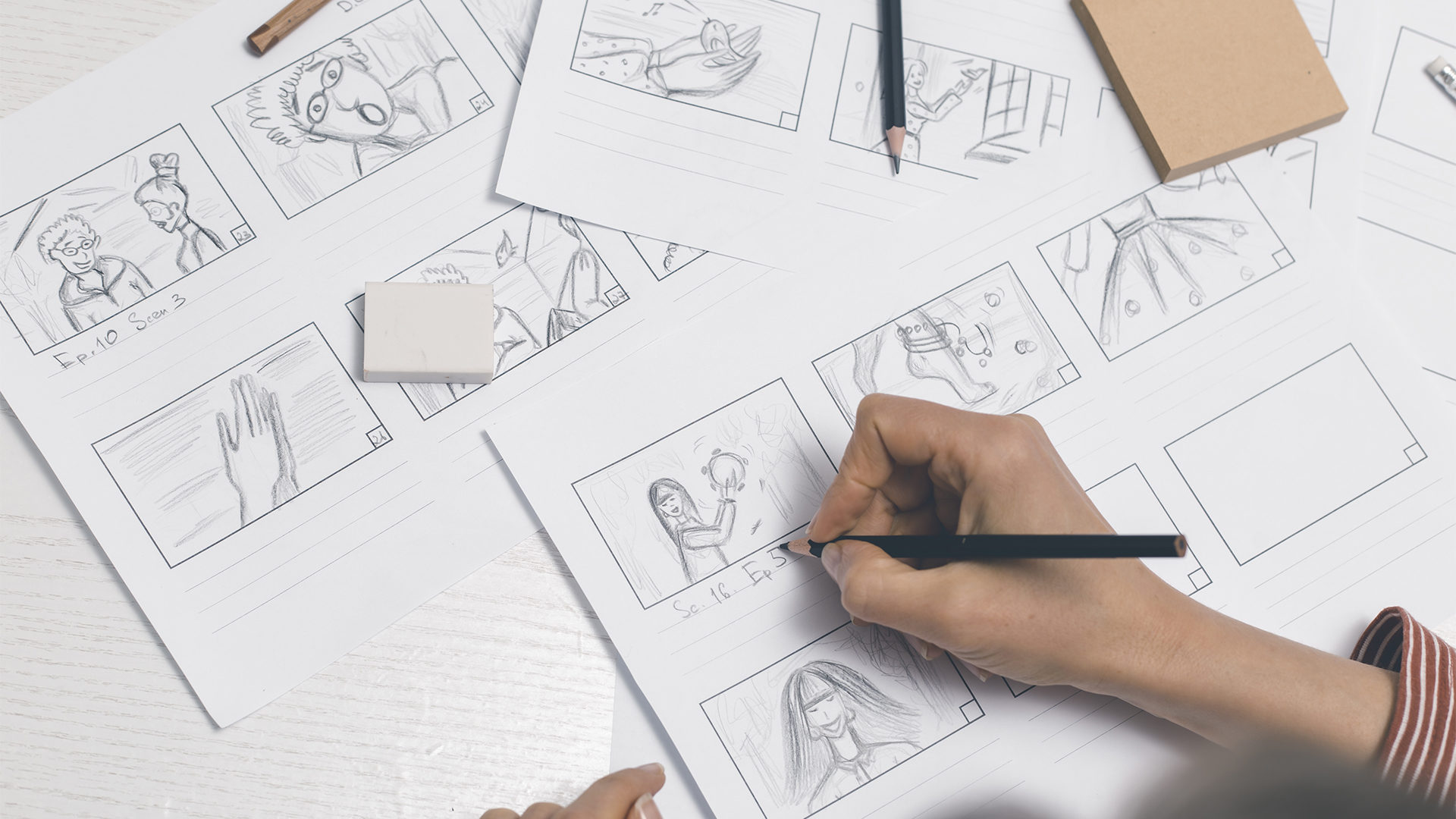 The 3 Stages of the Film Production Process

The filmmaking process can be broken down into 3 easy steps. Learn what they are, and tips on how to approach each step for a smooth and successful film production process.

Is your notebook full of concepts for sci-fi shorts and action series? Is your YouTube history a long list of film trailers and VFX production software tutorials? It sounds like you’re ready to make your first short. The first step? Conquering the 3 stages of film production.

Creating your first short film doesn’t need to be intimidating — just remember to consider every detail that will make up the big picture (before you bust out the lights, camera, and action sequences).

We’ve written this article to help beginner filmmakers understand the filmmaking process from script to screen. We’ll share some important tips to help you see success at each of the 3 stages of film production. Hollywood Walk of Fame here we come!

What are the 3 stages of film production?

The film production process can be divided into countless steps to take a film from concept to a finished piece. However, there are three key stages that take place in the production of any film: pre-production (planning), production (filming), and post-production (editing, color-grading, and visual effects).

What happens in Pre-Production?

If pre-production had a mantra it’d be “make a plan now“.

The pre-production stage of the filmmaking production process is where you create a vision for your film, a plan for production (based on that vision), and secure all the resources (humans, space, and equipment) you will need to complete your film.

Lock your script and storyboards

A good concept is a great starting point, but without characters that feel, move, speak, and create a cohesive narrative, you’re setting yourself up for trouble in the production phase. Pre-production is when you should be working with your team to solidify the structure of your story.

It doesn’t matter if you’re making a sci-fi pilot or a soap ad — you should know what your script, photography, and shot sequences will look like from start to finish.

Create a budget, cast actors and hire your crew

Pre-production is the time to research and understand exactly how much money you need to finance each stage of the filmmaking process. You want to think about actors, crew, costumes, catering, equipment, location rental, and any special permissions you’ll need for filming.

Once you know what your expenses and your budget are, then it’s time to (holds breath)— spend.

Trying to make a short film on a budget? Check out our top 11 tips for filmmaking on a budget.

Now that you have the cast, crew, and equipment locked, it’s time to create a day-by-day film production timeline that will guide the rest of the production process, especially shooting.

Creating a production schedule will help you organize all the people, places, and other external factors (like time of day, weather, set location permissions) that are required for each shoot.

Will you need a 5 AM call time to catch the sunrise or a high-speed chase at midnight? Having a detailed, production timeline helps ensure you get the shots you want with the budget you have, and that everything runs smoothly.

Key questions to ask during the pre-production and budgeting phase:

What happens in the Production stage?

What is the production phase of filmmaking?

The production stage, also known as principal photography, is when all the actual shooting and recording happens — with cameras, actors, and location licenses. For many, it’s the most exciting part of the filmmaking process.

Here are some key things you will want to think about before launching into the production stage with clapper boards blazing:

Production is “the point of no return”

The “point of no return” in filmmaking is the point during the production phase when it becomes cheaper to follow through to the end than to dip out early (even if you’re anticipating a flop of a film). The money is spent and to tear it all down now would create a way worse situation and financial fallout than pushing towards the finish line. See why a budget and production schedule are critical?

Make sure you have the shots you want

The production stage or (adjusts monocle) principal photography is where you want to ensure you have all the shots you will need in post. Of course, pick-up shots happen, but you shouldn’t be re-shooting 85% of your film in the post-production phase.

Keep things cool behind the scenes

Making a movie can be extremely rewarding — but it can also be a tiring, stressful, and potentially chaotic experience. As the leader of the production, it’s your job to create an ego-free set that has everything your cast and crew need to deliver their best performance. So whether that’s a full spread of bagels and coffee or an encouraging word between takes — make sure you’ve got their backs.

Want to know what it’s like to shoot in a Hercules C-130 plane? Check out our behind the scenes of the production video for HALO JUMP, our short film inspired by Godzilla’s iconic halo drop scene. You’ll see all the moving and shaking (and jumping out of planes) it takes to produce a life-like action scene.

What happens in the post-production process?

What is post-production in film?

Post-production is where all of the pieces of your film come together. It involves various post-production techniques including editing, color grading, and visual effects to turn your raw footage into a finished film.

In the post-production stage, you can do things like add lens flare to sci-fi shorts, flying digital doubles in fight scenes. You’ll also be streamlining all your jump cuts and high-speed chases into the perfect action sequence.

Post-production is where you decide what to chop and what to keep. If you plan your shots right, you’ll have more than enough footage to work with! Using software like HitFilm Express, you can cut weird pauses, stitch together the perfect montage and trim that monologue that went on a little too long.

Mad Max, Blade Runner, the Matrix, what did all these films have in common? Powerful use of color that helped set the tone of the film and tell the narrative. Grading your footage with a simple curves tweak can give your scenes punchiness and a strong mood, not to mention add an extra narrative tool to your palette (no pun intended).

Using audio syncing and mixing tools, you can also ensure all of your actors are perfectly matched with their voices — so there are no accidental ventriloquists. Post-production is also the stage where you can make sure background noise, speech, and sound effects are all perfectly balanced.

The post-production process gives you the power to seriously enhance the quality of your film with professional VFX.

You can turn that cardboard cylinder into a Captain America-style 3D shield (using the best VFX film production software for beginners) and create Hollywood-level visual effects like floating debris and explosions with HitFilm’s Particle Simulator. You don’t need a big budget to make something cool.

Maybe your lead’s roundhouse kick wasn’t so convincing — or maybe you forgot to remove a coffee cup from a series watched by 17 million people. Mistakes happen. But with a few simple compositing tricks, you can easily remove any unwanted objects from the final cut.

Ok, but what happens when you can’t fix it in post?

Sometimes you just can’t create the shot you need from the footage you have. This is no time to panic! It’s time to politely ask your DP to do a pick-up shot. Pick-up shots should be the exception, not the norm (and something you’ll want to set aside budget for in the initial pre-production phase).

You are now ready to shoot your first film

By now, you should have all the info you need to make your first movie step-by-step — so what are you waiting for? It’s time to set off into the horizon and start shooting. Don’t worry about getting it perfect, just get started. Your first filmmaking mission should be about one thing: transforming your idea from concept to content.

Go forth and conquer!

Ready to start your first short? You’ve mastered the 3 stages of film production, but you won’t get far without a good piece of film editing software. HitFilm Express is favored by filmmakers around the globe thanks to its easy-to-learn interface, color grading tools, editing tools, and countless effects. Download HitFilm Express for free and get started with the HitFilm Basics masterclass.