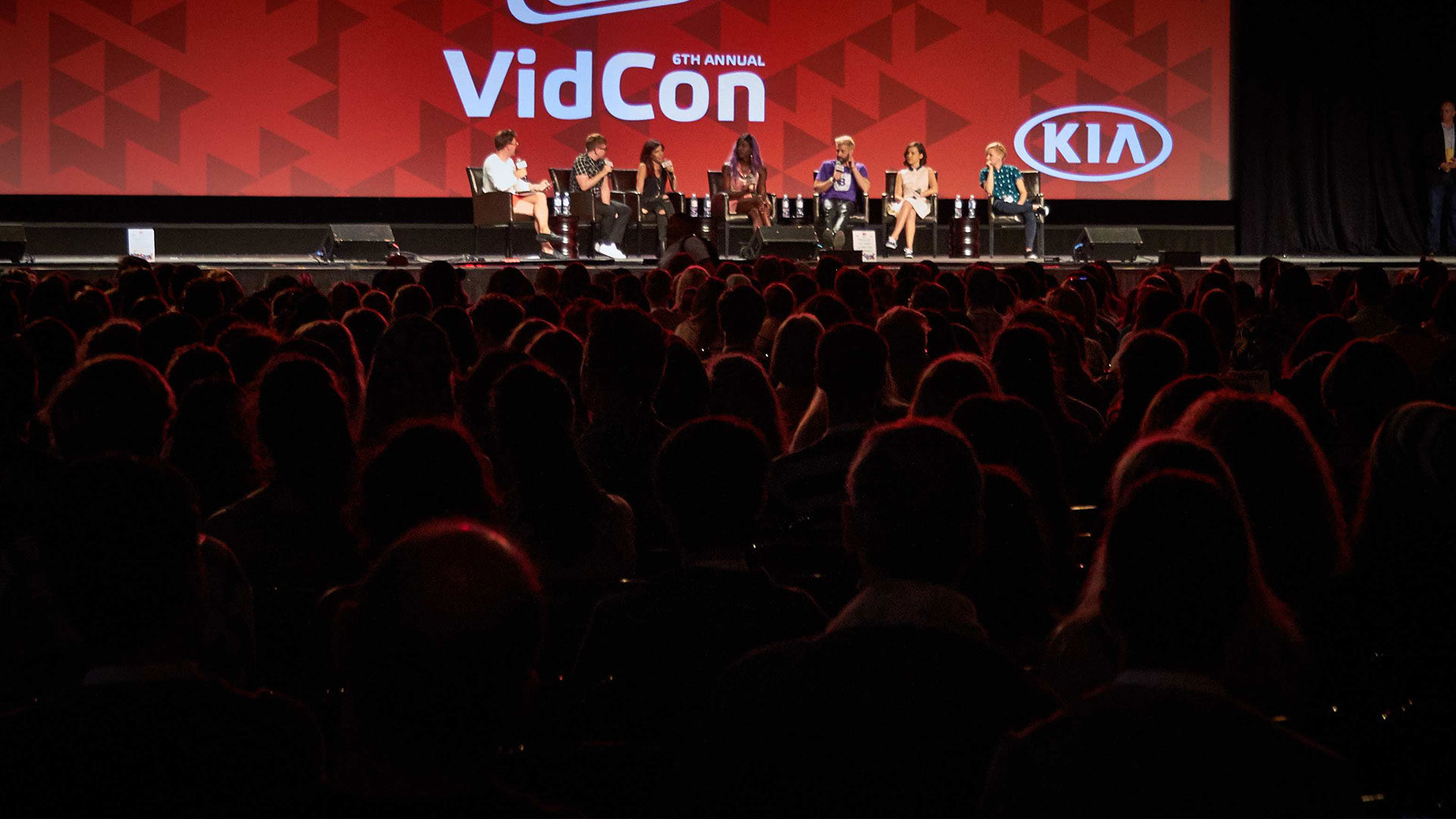 VidCon is a creative revolution

Creator culture is real. And it's inspiring. If you’ve never actually attended, you might think that VidCon wasn’t worth the money or the time. Even in the face of over 200 ‘social’ millionaires worldwide, the idea of a conference built around YouTube and its creators has some people raising their eyebrows.

If you’ve never actually attended, you might think that VidCon wasn’t worth the money or the time. Even in the face of over 200 ‘social’ millionaires worldwide, the idea of a conference built around YouTube and its creators has some people raising their eyebrows. Even we underestimated it as we wiped the post-HitFilm 3 Express release sweat from our foreheads and jumbled onto a 10 hour flight from London to LA.

But boy, did we underestimate it.

So much so that we’re feeling a burning need to tell you all about it.

This year over 20,000 people attended VidCon – a multi-genre online video conference that mashes together consumers of media, creators, social superstars, and brands in Anaheim, LA. As well as thousands of people to meet, there are also panels with some of the best online creators around, who offer up relatable and practical advice for YouTubers and filmmakers.

The panels, the networking, the signings and the speeches are an experience in themselves. By far the greatest part of VidCon (and the bit that can’t be faked) is the incredible atmosphere that it cultivates. Jack Conte, CEO of Patreon, stated in the ‘Emerging Business Models for Creators’ panel that this is the “best time in the history of humans to be a creative person”. By the end of the two day event, you believe him.

From the moment you hustle in through the massive glass doors and up the escalators, you have an awareness of the thousands of creative people, hyped up on coffee and food trucks, ready to learn from the very people they love to watch and who inspire them.

Don’t be fooled into thinking that the speakers at VidCon are small fish, either. From Corridor Digital to Hank Green, Final Cut King to the CEO of YouTube Susan Wojcicki – there is an endless supply of original talent and knowledge. The least popular panel we attended still had YouTubers who together amassed an incredible 4,533,551,013 (yes, 4 billion) views of their primary channels. So they knew what they were talking about.

Refreshingly, the superstars aren’t chained to their podiums, unless they’re at risk of getting mobbed. Freddie Wong had to run out pretty quickly after his RocketJump panel. We encountered very little hierarchy while we were there. Everyone was simply labeled ‘creator’ and you couldn’t tell from one person to the other whether they had 3 subscribers or 3 million. We came across a number of highly influential creators like Mike Diva and Steven Zurita from Annoying Orange just from walking around onsite. Oh, and we met Mark Ruffalo too. But that’s another story.

Most importantly, we saw many young creators who had chosen to bring their parents to a conference rather than drag them to the theme park across the road. Which simultaneously blows our mind and excites us massively for the future of online content.

For those thinking of going in the future, there are 3 tiered options at VidCon:

This is really for the people who love to WATCH content online. While you can’t get to any of the intimate panels, you are still treated to some incredible talks and performances from online personas such as Felicia Day, IISuperwomanII, Hannah Hart, AmazingPhil and Connor Franta to name a few. You need to be prepared to fight for these tickets though, as they sell out quick.

If you create your own online content and want to know how to develop your brand and engage with your audience (as well as some great panels about securing brand deals and multi-channel networks), then this ticket is for you. You share a level with the industry ticket holders too, so you’re likely to meet some pretty interesting people (like HitFilm!)

This gets you access to all the content including some of the attention grabbing fireside chats with some of the digital giants like YouTube, Google and Patreon amongst others. You also get access to the networking parties that take place on the top floor. Its a great way to get yourself involved in some interesting conversations.

Not only are people encouraged to create exciting and unique content, they are being educated on how to embrace the hard work and do it smart. To make a living out of it. They are being shown that you don’t need huge production value to be a creator – you can do it with a few tools and a lot of hard work.

It was perfect timing for us after the release of HitFilm Express for free. Our primary goal with its production was to empower and inspire creatives of all ages and skill levels to start making their own content and special effects without financial limitation. VidCon was all about the same kind of revolution. The idea that anything is possible, and that companies around the world are doing their best to help creators and filmmakers to what they do best – make awesome stuff.

There are a hundred other things we want to share with you from VidCon. We’ll be following up this blog post with some of the best tips we heard, and a feature on Corridor Digital’s Pixel panel. Next year, you’ll just have to go and find out for yourself.