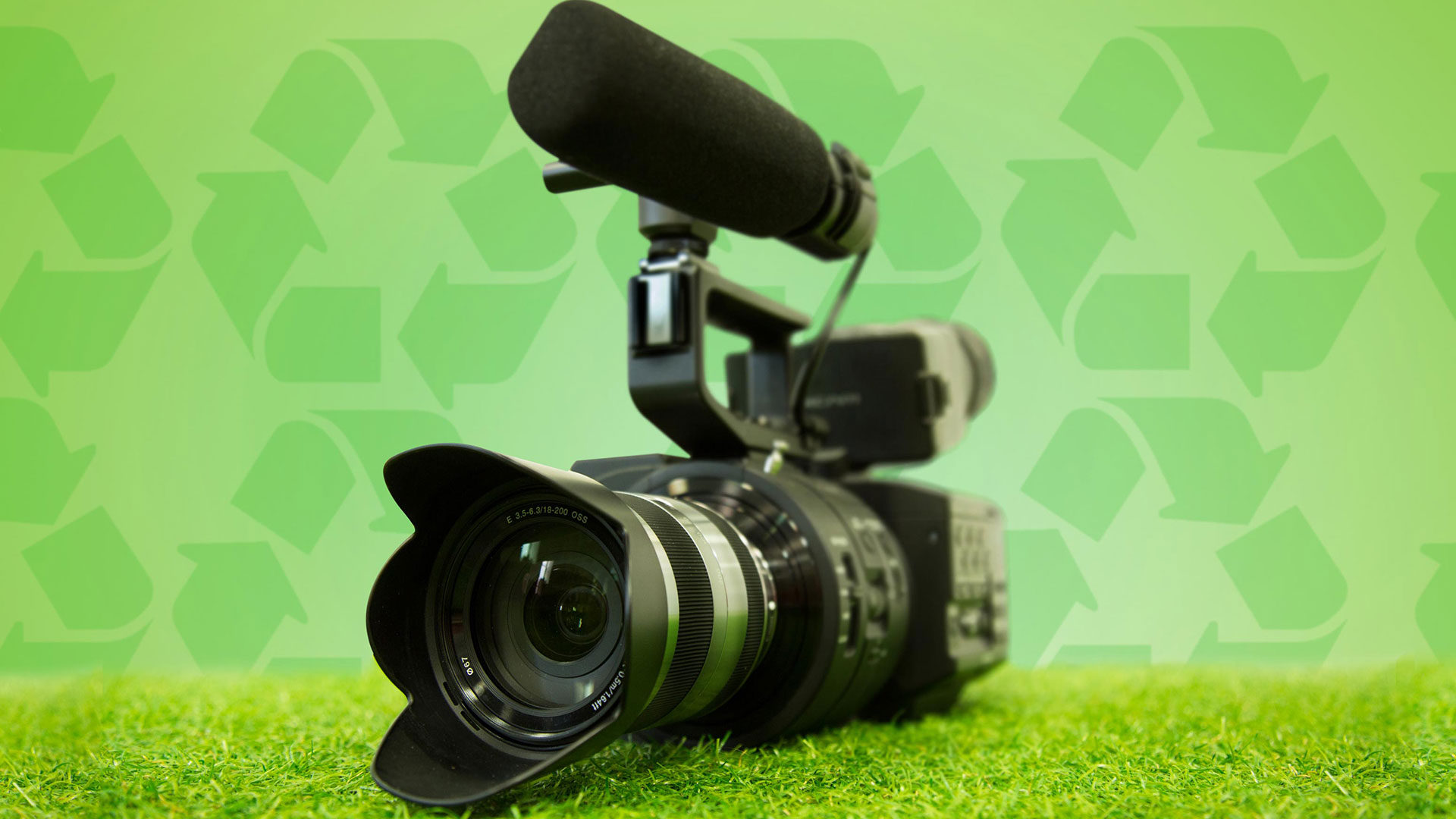 Be a sustainable filmmaking hero

Did you know that a two year study conducted by the University of California showed that special effect explosions, vehicles and diesel generators on Hollywood productions make the film and television industry second only to the oil industry in terms of polluting emissions, as well as being incredibly resource and energy consuming?

Quick fact: Did you know that a two-year study conducted by the University of California showed that special effect explosions, vehicles, and diesel generators on Hollywood productions make the film and television industry second only to the oil industry in terms of polluting emissions, as well as being incredibly resource and energy-consuming?

Now, that’s a pretty scary finding. It got us thinking.

HitFilm.com is the first filmmaking community for a lot of people and one they stick with for a long time. Over the years we’ve seen HitFilm users advance from beginners all the way up through the industry, into roles such as VFX artists, film producers and directors.

While we love to watch post-apocalypse and end of the world type blockbusters, no-one wants the price of that cool film to be real-world harm. Here’s a little insight into sustainable filmmaking, how Hollywood is starting to make changes, and how we as filmmakers can make a small difference.

Hollywood has been pretty laid back about the whole ‘sustainability’ issue up until fairly recently. The recent surveys have led them to try to reassess the environmental impact of filmmaking – even hiring on-set Eco Managers in some situations. If you REALLY fancy an education, take a look at this brief report detailing instances of reckless filmmaking in Hollywood.

In more recent years, there have been huge leaps made with regards to studios ‘going green’. One of the biggest successes was actually ‘The Amazing Spider-Man 2’, which was the most eco-friendly blockbuster in the history of the studio. They released this great behind the scenes featurette showing some of the ways they stayed environmentally friendly. They also tried to spread the word by including some eco-conscious set decoration throughout the movie. Bet you didn’t see those the first time!

The graduation scene was shot on location in East River Park, which was damaged by Hurricane Sandy. The studio planted new trees, leaving it better than when they found it.

The snow was biodegradable, the smoke was water based and fuel from crash stunt scenes was collected so it didn’t go into the drains. Amazingly 5,861 leftover meals from catering were donated to local shelters.

There are other impressive examples, such as in ‘Matrix Reloaded’ where 97% of set material was recycled, with tons of wood used to build 100 low-income family homes in Mexico. You can see more examples here.

Making movies without making a mess

Earth Angel‘s primary goal as a company is to consult with Hollywood studios and educate entire production teams on how to keep movies environmentally friendly. This interview with their Founder, Emellie O’Brien shows the huge difference she made while working as an Eco Supervisor on the Amazing Spider-Man 2:

While Earth Angel takes on Hollywood, some London-based studios are also trying their best to keep their waste and carbon footprint down. A recent study revealed that the screen production industry in London produces around 125,000 tonnes of carbon emissions each year. That’s equivalent to approximately 24,000 London homes! This even excludes distribution and exhibition of films and programs, or production office travel.

Whoof – that’s a lot. HitFilm worked directly with the BBC earlier in the year, teaching VFX as part of the Radio 1 Academy. I took the chance to ask Production Manager Erin Mactague about how they try to stay green as an organization:

K: Switching to a sustainable model is a logistical challenge; what benefits can it bring to a production (aside from simply being nice to the environment)?

E: Personally I’m not keen on the phrase ‘simply being nice to the environment’, I think ‘simply not destroying the only planet we have’ has a little more impact with a production team! Yes it can present logistical challenges, but it can also present us with new creative ways of working. I’ve worked on a production recently where we filmed at the same location as another crew. Instead of sending two teams to cover the same event we shared resources with another programme. We shared a crew, shared footage, saving money and time and the bonus was reducing our carbon impact.

However aside from the benefits, you can see on your cost report, I cannot underplay the selfish ‘feel-good’ factor that going with a sustainable model can achieve. We decided not to use water bottles at a recent event, and we replaced them with water boxes and vegware cups instead. It caused some disappointment when the crew realized they weren’t filled with wine! Each box stopped 20 x 500ml plastic bottles from being sent to landfill. Knowing the impact that a small change to how we keep the crew watered on location has had on the environment is a hugely rewarding benefit.

K: What’s been the biggest challenge so far?

E: Surprisingly there have been few. You can see from the impact that Albert is having on the broadcast industry and Julie’s Bicycle on the Events industry. People are ready to make changes to the way they work. Hotels, travel companies, locations, suppliers are all creating their own sustainability policies. However, if I’m being really honest, my bugbear at the moment is AA batteries. I try and encourage the team to use rechargeable batteries wherever possible. However I’ve yet to find one that works as well as the standard ones for full-day high energy use. Please someone show me a decent contender!

K: What has the reaction been so far from the large production team in response to it?

E: The reaction from the team has been great. This year we were tying in Radio 1’s Academy with #BBCMakeItDigital. Not only were we looking at making our content digital, but we found creative ways of making our event more digital. A benefit of this has made it more sustainable – such as our ticketing process. Previously, we would’ve sent physical tickets out to the thousands of participants, or manned a ticketing booth for the weeks leading up to the event. This time we worked with Skiddle.com to create e-tickets for our event. Participants signed up online, downloaded e-tickets to their smart phones and we scanned them into the venue using smart phones. We didn’t need to print guest lists or send physical tickets in the post. The reaction from the public was really positive too and a happy audience makes a happy production team.

How can you be more sustainable out of Hollywood?

It’s obvious that as smaller filmmakers, we’re not going to make as much of a dent as a Hollywood blockbuster recycling 25 tons of waste instead of sending it to landfill. That still doesn’t mean we can’t practice being a green filmmaker now. Try a few of these:

1. Carpool as much as you can if you have a number of locations to get to
2. Consider using cooler LED lights that can run off rechargeable batteries, rather than requiring a heavy generator
3. Try to limit the amount of paper you use – do you really need to print another draft of the script?
4. Reuse old props and set pieces, or send what you can for recycling
5. Check that you won’t be disturbing any natural habitats or wildlife to get your shot. Keep an eye on discarded trash

Even if some of these are beyond your reach – just take a look around on your next project. Have a quick think about how your film might be impacting the environment.

Meanwhile, in the HitFilm office, we’ve been trying to be sustainable in our own way. Joe – our own Eco-Warrior – has introduced recycling bins as standard, ensures we never leave a light on overnight or any of our machines on standby. Joe has even set up little herb gardens on our windowsill. Next step: Kitchen composting!

Let me know whether you consider yourself a sustainable filmmaker, and what kind of tricks you have for keeping things green. We’d love to hear some community stories!